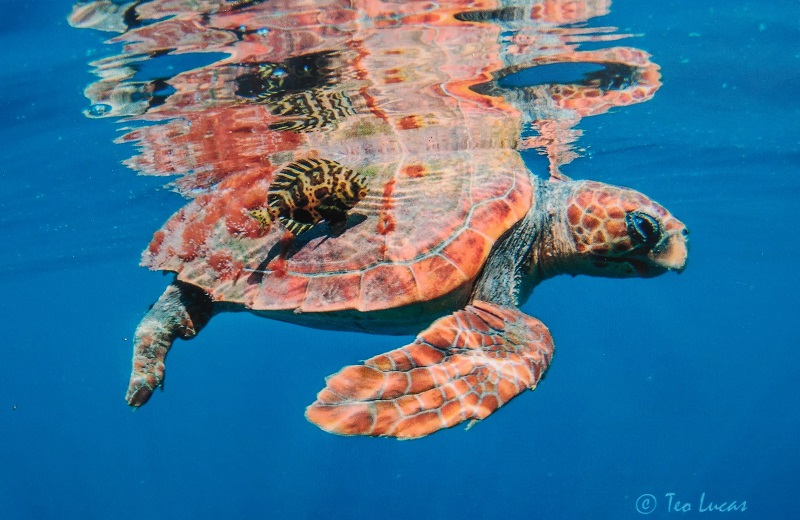 The loggerhead turtle, also known as Caretta caretta, lives in pelagic habitats. It is a carnivorous species that feeds especially on small fish, molluscs, cephalopods, jellyfish and other organisms that form part of the animal plankton (zooplankton). It is most commonly observed at the surface from boats and rarely when diving.

The name loggerhead turtle was given to it because of the ease with which fishermen could catch it, as they would find it floating on the surface. It is also known as the loggerhead turtle, as it has a larger head than the rest of the species of sea turtles (about 25 cm).

It is one of the most common in Tenerife and the Canary Islands, along with the green turtle. The loggerhead turtle is present all year round and becomes abundant in the spring-summer months, inhabiting temperate, tropical and subtropical waters all over the world.

Like the green turtle or Chelonia mydas, the loggerhead turtle is endangered, so we must take care of all of them.

The carapace of the loggerhead turtle is longer than wide, brown in colour with a combination of reddish and yellowish tones.

Their average size is usually about 70 cm, although as adults they can reach 120 cm in length and weigh up to 200 kg.

They have strong jaws adapted to feed on molluscs and crabs, although they also eat fish and jellyfish.

What does the loggerhead turtle eat?

Loggerhead turtles feed on animals as well as seaweed and marine plants. Some fish, jellyfish, sponges, shrimps, squid, fish eggs and sea urchins are part of their diet.

Throughout their lives, sea turtles know different habitats separated in space and time, like the rest of the species that live through migrations.

When the loggerhead turtle hatches, like other sea turtles, it leaves its nest and swims rapidly towards the interior of the ocean. This is the stage in which it is most vulnerable, as it is only a hatchling of small weight and size and is attacked by a number of predators, both marine and birds.

Once it has moved away from the coast and reached the oceanic zone (at a depth of more than 200 metres), it will allow itself to be dragged by the ocean currents.

This is the beginning of what is known as the oceanic juvenile phase. Experts estimate the duration of this stage for loggerhead turtles in the North Atlantic to be between 6.5 and 11.5 years, the longest oceanic phase along with that of the leatherback turtle. The green turtle or Chelonia mydas has a comparatively short oceanic phase.

Once past this phase, turtles move to tropical or temperate zones where they begin their juvenile neritic phase.

When they reach sexual maturity they move to adult feeding areas, where they begin their adult phase and reproductive life.

The nesting areas of loggerhead turtles are the same as the ones where they hatched years ago.

How does Caretta caretta reproduce?

Although loggerhead turtles are solitary, during the nesting season the males migrate to the mating grounds for courtship with the females and it is the females who decide. If a female loggerhead turtle is not happy with her mate, she will swim to the bottom to escape. If the male persists, she will try again.

Once two loggerhead turtles “like” each other, in order to reproduce, the male will bite the female’s neck or part of the female’s flipper, or dig his claws in to hold on.

Later, the female turtle lays between 100 and 130 eggs in a small hollow that she will protect for a period of 45 to 80 days.

At hatching, loggerhead turtles weigh only 40 grams and measure 4 centimetres.

Enemies of the loggerhead sea turtle

As is also the case with green turtles or Chelonia mydas, their main predators are sharks and humans. It is up to us to protect them and treat them well, because although the adults can attack with their bite, the eggs and hatchlings are totally defenceless.

Loggerhead sea turtle hatchlings are usually discovered at night, trying to avoid other predators such as crabs or seagulls, although they do not always manage to escape.

Some species that accompany the turtles are parasitic, while others are beneficial or simply do not influence the life cycle of their host. The most common belong to the group of so-called epibiont species: organisms that live for at least one phase of their life cycle on a larger one, which is generally not bothered by them. The following are the most common relationships:

It is common for loggerhead turtles to be accompanied by fish. There are several species, and some of them will do so exclusively in their juvenile phase, such as the pompano. Others, such as remoras, travel attached to the turtle’s shell.

Two species of amphipods of the family Gammaridae live in association with the loggerhead turtle: Podocerus chenolophilus and Hyale grimaldi. They are very common epibiont species, living in the folds and on the carapace of turtles in dozens of individuals.

The turtle does not really get any benefit from dragging the so-called patacabras (Lepas anatifera) or algae on its shell, which drag it along on its movements.

In fact, it can happen that a turtle may find it difficult to flee when we approach it because it is carrying this ballast.

If we observe clear signs of exhaustion, for example if the turtle frequently sticks its head out of the water to breathe or finds it difficult to escape, we can capture it to clean it. Carefully clean the turtle’s shell and then return it to the sea. This practice does not have to be systematic, only in extreme cases, as it is not clear that it is always beneficial for the turtle.

For a long time it was thought that the loggerhead turtle was harmed by the crab Planes minitus. It was believed that when the turtle was submerged, the crab, unable to withstand the increased pressure, would pinch the turtle’s flesh as soon as it reached depths of more than 10 metres, forcing it to return to the surface.

The loggerhead turtle, as well as all sea turtles such as the green turtle (also very common in Tenerife and the Canary Islands) are protected by national and international legislation.

Remember that it is forbidden to capture, disturb or even feed them. Only in case you find a trapped or injured turtle you can help it, but make sure that your actions are really going to help it… Otherwise, leave it alone 🙂

Diving with turtles in Tenerife is a unique experience to enjoy in complete peace and safety.

Armeñime is a small village in the south of Tenerife, located in Ver todo

A comfortable and safe way to see turtles in Tenerife. Discover the Ver todo

Discover the best excursions to see dolphins and whales. Whale and dolphin watching in Tenerife.

Enjoy Tenerife to the fullest with the best plans.