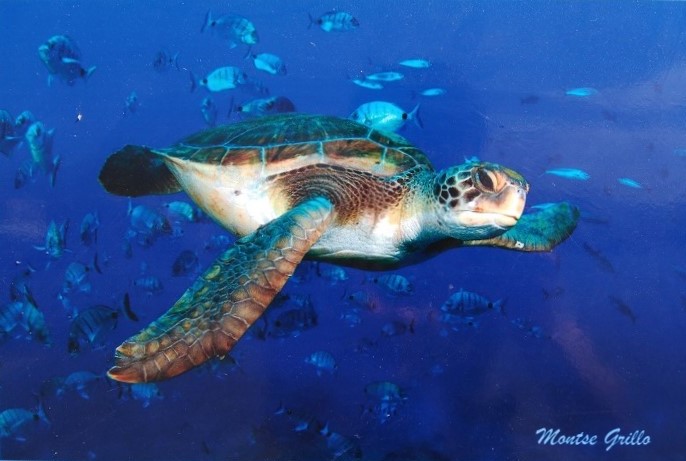 The green turtle or Chelonia mydas is of coastal habitat and has a more varied diet than the loggerhead turtle, feeding also on algae and marine phanerogams (sebadal). Locally common.

The green turtle is the most common turtle on the island of Tenerife and all the Canary Islands. It is a large sea turtle that inhabits tropical and subtropical seas all over the world, with one population in the Atlantic Ocean and another in the Pacific.

You should know that the green sea turtle is a globally endangered species, legally protected from capture, harm or death. Even so, green sea turtles and their eggs continue to be abused in many parts of the world due to human practices such as hunting and pollution.

Turtles often drown when caught in fishing nets, or even lose their habitat when it is collapsed by local human expansion. The latter is the most important cause of the loss of green turtle nesting sites.

What does the green turtle eat?

Green turtles are mostly herbivorous, although younger turtles also feed on jellyfish, crabs, snails and worms. It has a more varied diet than the loggerhead turtle, feeding also on algae and marine phanerogams (sebadal).

It is the only sea turtle that is primarily a hervivore. It is very important at an ecological level as it favours the distribution of nutrients that it collects in rich areas and deposits in poorer ones.

The green sea turtle or Chelonia mydas has a short neck and paddle-shaped flippers adapted for swimming.

An adult green sea turtle can grow up to 1.66 metres long. In terms of weight, although turtles have been found to weigh more than 300 kg, they typically weigh around 200 kg as adults.

Unlike other turtles in the same family as Chelonia mydas, this one has a rather short snout, and its beak is not hooked.

As the green turtle grows, its shell also changes in terms of colour patterns:

As mentioned above, there are two main populations of green C. mydas sea turtles: the Pacific and the Atlantic; the latter being the one you will find in Tenerife and the Canary Islands. Although both are green sea turtles, they are genetically distinct and have their own feeding and nesting territories.

Depending on their life stage, green turtles change habitat at least three times.

As adults they spend most of their time in shallow coastal waters rich in sea grass, which is why you can find them concentrated in the Palm Mar de Tenerife.

To lay their eggs, the turtles return to the nesting beaches.

When they are young (about the first 5 years of life) C. mydas swim in deep water and the open ocean, so sighting them will be more difficult.

It has been estimated that adult swimming speeds can vary between 1.4 and 3.6 km per hour and can travel up to 65-84 km/day.

The main enemies and predators of the green turtles

As adults, we could say that the enemies of green sea turtles are large sharks and humans.

When they are small or young they have more predators, such as some crabs, small mammals or coastal birds.

The life cycle of the green sea turtle

The green turtle is believed to be the longest-lived of the sea turtles, with an average age of 80 years.

It reaches sexual maturity between 20 and 50 years of age. Females nest approximately every two years.

Copulation takes place in the water and the female, when fertilised, goes ashore.

She digs a hole in the sand and deposits between 100 and 200 eggs. She then covers them to prevent predators from finding them and returns to the sea.

The hatchlings, after about 60 days, break the shell with their teeth and leave in search of the sea.

Diving with turtles in Tenerife is a unique experience to enjoy in complete peace and safety.

Armeñime is a small village in the south of Tenerife, located in Ver todo

A comfortable and safe way to see turtles in Tenerife. Discover the Ver todo

Discover the best excursions to see dolphins and whales. Whale and dolphin watching in Tenerife.

Enjoy Tenerife to the fullest with the best plans.